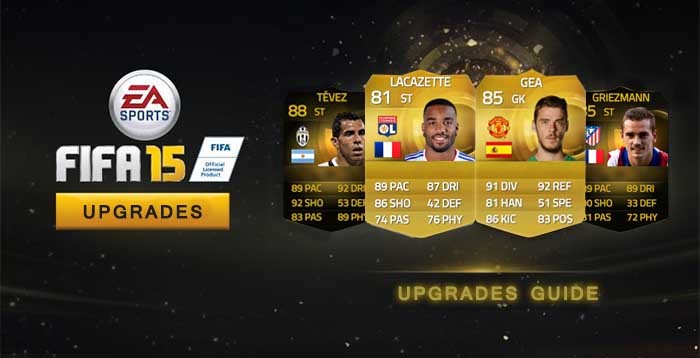 The seasons of upgrading FIFA 15 Ultimate Team is coming, but do you know exactly how to do with it? These tips following can help you in deed.

Q: How are players upgraded on FIFA 15 Ultimate Team?
A: Different to what happens on other game modes, the players aren’t automatically updated throughout the season according to their appearances in real life. Some may receive In Form cards, but most players remain with the characteristics they were given at the start of the season. In Ultimate Team, upgrades are made through the release of new cards in determined periods.

Q: What happens exactly if a player receives a Winter upgrade?
A: When a player is upgraded, the cards that start coming in packs have got the new ratings and attributes according to their performance on the real life pitch.

Q: Can a player change categories if he is upgraded enough for that to happen?
A: Yes. As long as the upgrade gives him enough points for that, a player’s NIF card can go from bronze to silver or from silver to gold. The IF cards never change category, though.

Q: Why are there some In Form cards that didn’t receive an upgrade although their NIF did?
A: All the gold players that receive upgrades and have got IF cards will have those IF cards upgraded as well. However, not all bronze and silver players’ IF cards are upgraded. The player’s IF card is only upgraded along the old card if his UP card is of the same category as that one.

Q: Why wasn’t a certain player’s IF card upgraded if his NIF and UP were of the same category?
A: Probably because that IF card already had the maximum rating for its category: 64 or 74.

Q: When is it upgrade season on FIFA 15?
A: There are two upgrade seasons throughout the game: Summer and Winter upgrades. The first one happens within the transition of one FIFA to another looking to reflect the player’s evolution between two seasons. The second one, in February / March, rewards the players who stood out the most along the first half of the season with the release of new (improved) cards.

Q: If I have a card of a player that is to receive an upgrade, will this card get upgraded?
A: No. It remains exactly the same, with the original rating and attributes that were defined initially in the game.

Q: If I have an In Form card of a player that is to receive an upgrade, will this card get upgraded?
A: Yes. Different to what happens with the NIF cards, the IF cards released before the upgrades will be upgraded in the same proportion as those (but automatically) except if there’s already been a category change within the UP card attribution.

Q: What’s the reason for there to be this exception?
A: According to EA, this is so “the IF card’s value and bronze/silver squads are not negatively affected”.