We all know that FIFA was accused of it’s terribel updating and transfering, and  whether or not it’s entirely a debate that FIFA’s creation all on it’s own. EA Sports overhauls major system to deal with the probiems they meet, but it still seems like more or less the same game as the year before’s.This is what we will discuss later. 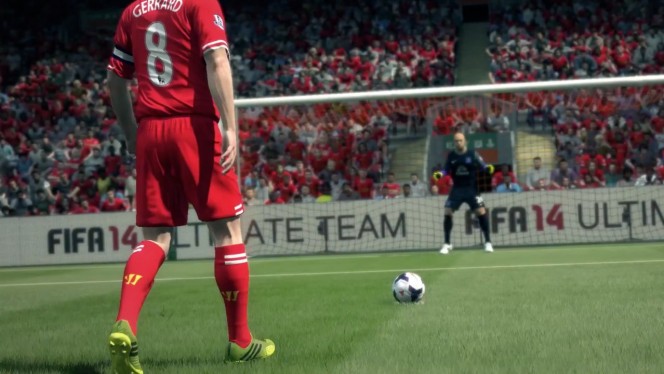 Commentary
I can’t tell you exactly what the commentator’s saying, but I can tell you I’ve heard it before.
One of the most consistent parts of the FIFA series, at least in English, is the constant commentary of Martin Tyler and Alan Smith — who have co-commentated the club-level matches in the series since 2012. The commentary since then has expanded, bit by bit, but has still remained the same at the core, sometimes frustratingly so.

Repeat offenders in the series will recognise commentary immediately, and within two or three matches will be settled into the same, constant motion they had in the game before, and the game before that. It’s not the first time EA Sports has chosen to use the same commentary team repeatedly — Martin Tyler and Andy Gray took the reins from 2006 to 2011, and Clive Tyldesley and Andy Townsend have commentated on international matches in the FIFA series since the licensed 2010 FIFA World Cup game.

Stadiums, broadcasts and licensing
You can practically hear the crowd’s disappointment when he slips.
This may seem like a very broad topic, and it is, but these link quite intricately. A large part of the audience buying and playing the FIFA games are dedicated football supporters — supporters familiar with players, kits, stadiums and what a football match looks like when broadcasted live.

One of the most iconic scenes in the sporting world is that of a full football stadium, like Borussia Dortmund’s Signal Iduna Park or Manchester United’s Old Trafford, filled to the brim with fans cheering their team on and singing their songs. What EA Sports have accomplished very well is recreating the atmosphere of a live match day broadcast, and one of the reasons for that is the painstaking effort they’ve gone to in order to secure licensing for their game.

Take a Barclays Premier League match between Manchester United and Liverpool at Anfield, for example: The commentary will be focused on the historical rivalry between the two sides, the interface around the screen will be the same, Barclays-branded and themed scoreboard seen on television, and the stadium would echo that of a real-world stadium, both aesthetically and audibly. Further than that, however, Liverpool supporters will jeer Manchester United captain Wayne Rooney when he’s on the ball, since he’s comes from Liverpool and played for the club’s rivals on Merseyside, namely Everton.

It’s a careful, planned execution of what a football broadcast should be, and translates excellently to an in-game scenario. It provides a thoroughly immersive scene to play through — but more importantly, one that football fans worldwide will recognise. 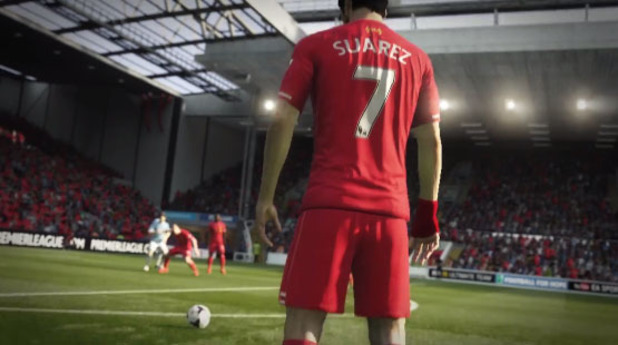 Players
Suarez was definitely the right player to take this free kick with. Good job, EA Sports!
Of course, a football game would be nothing without the actual football players who are paid exorbitant sums of money to kick a ball around a grassy field every week or so.

Football players in FIFA are somewhat accurately rendered versions of their real-world counterparts, though often they’re still quite a bit off from what the real-world equivalents look like. While their physical appearance will prove somewhat familiar to players, its their skillsets that will appear most prominently to long-time football fans.

Take Lionel Messi for example — he’s a diminutive forward with excellent close control and an excellent eye for goal. This reflects in game, where his sprint speed, while high, won’t get him past defenders as effectively as his turns on the ball will, and how he is absolutely lethal if given space on his left foot within 25 yards in front of goal.

While it may not be fair to use the current second-best player and game’s cover star as an example, this translates downwards to less prominent teams, where players like Real Sociedad forward Carlos Vela or Tottenham Hotspur midfielder Christian Eriksen will play just as similarly to their real-world equivalents as Lionel Messi does to his.

What this offers is a sense of understanding — you won’t swing high crosses into Lionel Messi, but you’ll rather try get it to him in a space where he can control it on the ground, while Spurs’ Christian Eriksen would be better suited to be providing the ball to a winger or forward than trying to take on an entire defensive line himself. It means fans of the series and of actual football have a good expectation of what a player will be before he gets on the ball, and some prior knowledge when setting up their teams.

Full-time
I do believe one of FIFA‘s greatest assets is its licensing — other than the UEFA Champions League, the series trumps its competition in Pro Evolution Soccer and it shows with the familiarity it creates for its users.

Of course, FIFA is not a perfect game and certain things like the repetitive commentary cannot be ignored. The series does have its downfalls, but its aesthetic and its recreation of the world’s most popular sport are things that should be praised for what they are: An excellent selling point which keeps millions of players on their game every day.

FIFA 15 is my favorite game. I play it everyday, so i hope it would be better and better!