The Uruguayan brought down Dani Alves’ long ball to produce a sweet finish past Iker Casillas on 55 minutes, restoring Barça’s lead after Cristiano Ronaldo had cancelled out Jeremy Mathieu’s opener in the first half. Madrid now have ten matches to recover their four-point deficit with Luis Enrique’s side at the top, but they have a superior head-to-head record as they beat Barça 3-1 at the Bernabeu earlier in the season. 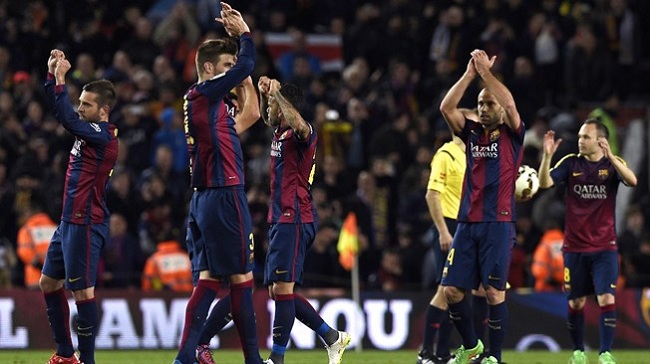 Elsewhere, Cordoba picked up three red cards as La Liga’s bottom side slipped to a 3-1 defeat at Real Sociedad. Aleksandar Pantic was dismissed after just six minutes but the visitors still managed to take the lead as Florin Andone put them in front.

Imanol Agirretxe’s equaliser meant David Moyes’ side were level at the break and they moved in front when Gonzalo Castro scored with just 15 minutes remaining. Inigo Lopez was shown a second yellow card before Alfred Finnbogason wrapped up the win in injury time, with Daniel Pinillos sent off in the closing moments of the contest.

Sevilla made it two wins in four days over Villarreal as they won 2-0 at El Madrigal. Unai Emery’s side moved four points behind fourth-placed Atletico Madrid and six clear of Villarreal in sixth courtesy of second-half strikes from Coke and Vitolo.

In the other game, Deportivo La Coruna are one point above the relegation zone after they were held to a goalless draw at home by Espanyol.