Good news, guys, EA Sports will release free FIFA 15 packs for FUT on PS4, Xbox One to celebrate 6 years of FIFA 15 Ultimate Team, which will help to save some FIFA 15 Coins – you can get free football players in the packages.

You heard that correctly. EA, who currently have to deal with the childish abuse on their Twitter account from entitled UK players on a daily basis has decided to give back to the community.

Until Sunday March 29, you can claim a free FIFA 15 pack on PS4 and Xbox One at 6pm UK time every day as of now. You can see a list of some players that are possible in the packs below, although this could relate to the players who are available by winning a special FUT anniversary tournament too. 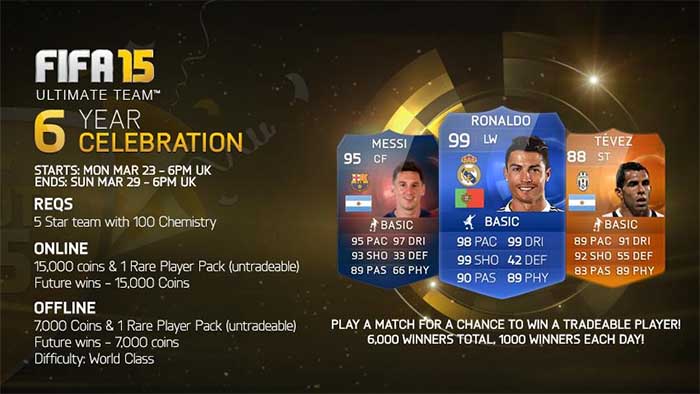 Given the amount of cash that players spend on the FUT system, it’s nice to see EA giving away some more freebies – nobody can complain about that.

One thing to remember though – these free FIFA 15 packs are untradeable, meaning that you can’t sell them on again for coins if you get a rare player.

While this is frustrating if you pull out a Messi or Ronaldo, it’s due to exploiters that EA has enforced this so that spammers with multiple accounts cannot resell vast amounts of free pack players for profit.

What do think about this free packages? Are there actually any UK players out there who are appreciative of EA’s efforts?