In this guide, we will show you how to trade yourself to at least one million FIFA 20 coins on FIFA Ultimate Team. It isn’t easy, but with a little persistence and patience, it can be achieved by EVERYONE. Trading is very much a trial and error procedure and what works for us, won’t always necessarily work for you, so with this in mind, we will try to cover all angles and also many different approaches which we have found which are effective methods of trading with on the various versions of FIFA. Using these methods we estimate we have made around 325 million FIFA coins since we started playing Ultimate Team on FIFA 20, now we’re not saying that you will make this kind of profit as we put a lot of time and effort into achieving these amounts, however, if you work at it anybody can make one million coins during the year lifespan of a FIFA title.

Starting out
To start off with, if you are a returning user to Ultimate Team, you will receive free packs as well as other various items, this is a very handy springboard to help you on your way, obviously it’s possible you may get lucky and pull a good player which can really kick-start things, but even if not, make sure you maximize the value of the cards you receive. As with all sales, you should try to aim for the top end of the market, price-wise, don’t try to be the cheapest around unless you have to be, i.e. if you are desperate for coins or if a player just won’t sell.

EA Tax
When you are selling your card and working out your profit, remember that EA takes 5% commission for each sale, so don’t leave your profit margin too small. See below for a basic guideline on where you should set your prices depending on how much you spend. 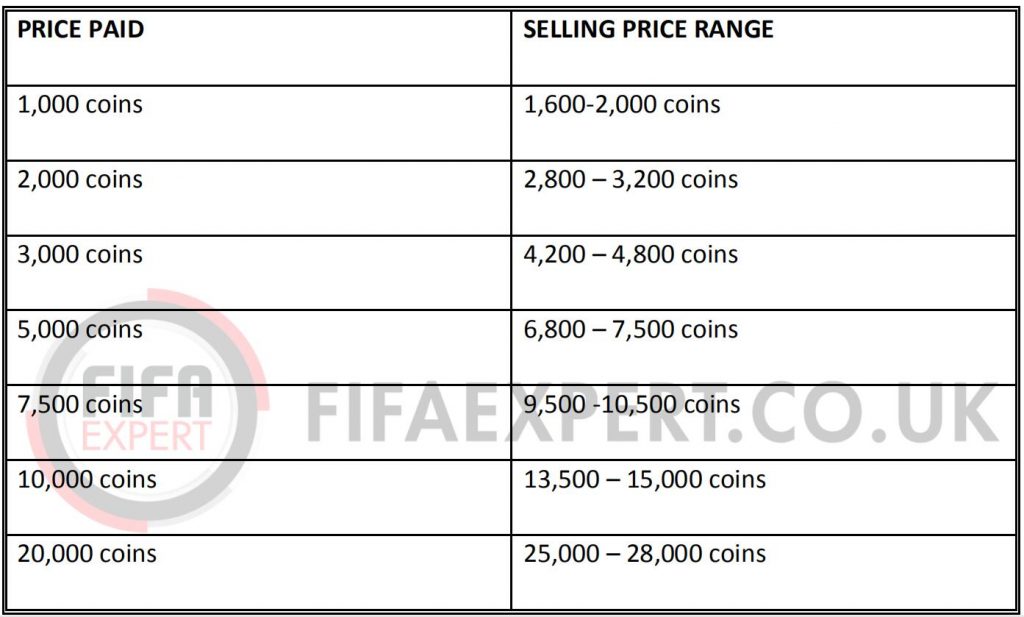 Obviously, you can tinker these as you please but these prices usually sell pretty quickly meaning you can have a quicker turnover of capital. If you set the selling price higher than in the table then it may take you a little while to move the player or card you bought on.

Increase your trade pile size
A new feature was added on FIFA 13 and then expanded upon, for the latest versions. Increasing both your transfer list and you watch list is something that you must purchase from the EA Sports Football Club Catalogue as soon as possible. Increasing it to 40 instead of 30, and then even further if possible (reduced this year to try and cut down the effectiveness of coin sellers). This is very helpful if you are buying lots of players and selling for a smaller margin so be sure to unlock this from the EASFC catalog as soon as you can. EA could change this every year so just make sure you filter down the list and unlock the maximum that you can. They could go higher than before because of the security that price ranges have brought and the fact that they made more from FIFA points than they ever have done, on FIFA 20.

Hours to trade
Now, if you place bids on all the ones that are cheap enough, it’s expected that you will get outbid on a few, again this is effected by the time of day in which you are placing bids, in the major countries that use FUT (the USA, AUS/NZ are all heavy users of FUT so remember this if you are trying to find the quieter times to trade-in), but generally, if you place bids on lower value player when people are at work or school, you are much less likely to get outbid and therefore, far more likely to make a profit.

IF YOU CHOOSE YOUR TIMES OF DAY TO TRADE WISELY, YOU WILL MAKE A LOT MORE PROFIT, IF YOU FIND THE RIGHT TIME YOU CAN MAKE SOME MASSIVE PROFITS.

So, let’s say you have invested all your money on Defoe, of Bournemouth with a basic chemistry style (just an example of a fairly popular BPL starter player) and you have purchased 11 of these for between 1.1 and 1.3k, you obviously now want to sell them, so say you have bought all these early in the morning, in an off-peak time, you then have all day to sell them in the peak times (peak times are when most people are online, so after work of school or all weekend). Don’t worry if you cannot search during non-peak times, bargains can still be found at peak times, but you would have to expect to get outbid a lot more. So, you would try and sell all these Remy’s in one day, so that you have more coins to reinvest the next day, thus meaning your profits will grow and grow day by day. Simple but effective and remember to reinvest your profits.