Review The Elder Scrolls Online: Morrowind – The Famous Open World RPG The Elder Scrolls III: Morrowind signed Bethesda was released more than 15 years ago. Many players retain great memories of Vvardenfell Island, fortunately remembered by two other great chapters, Oblivion and Skyrim. And if we told you that you could have a chance to get back in the Morrowind province, even though 700 years before the events in the original game?

It is thanks to The Elder Scrolls Online that you can launch into a new adventure on Vvardenfell Island, and more specifically thanks to the expansion of The Elder Scrolls Online: Morrowind. It’s a MMORPG with just a few years on the shoulders (just over 3) that gets richer since June 6 of this new content that could also attract those who usually do not get caught out of online role playing games. Let’s find out why. 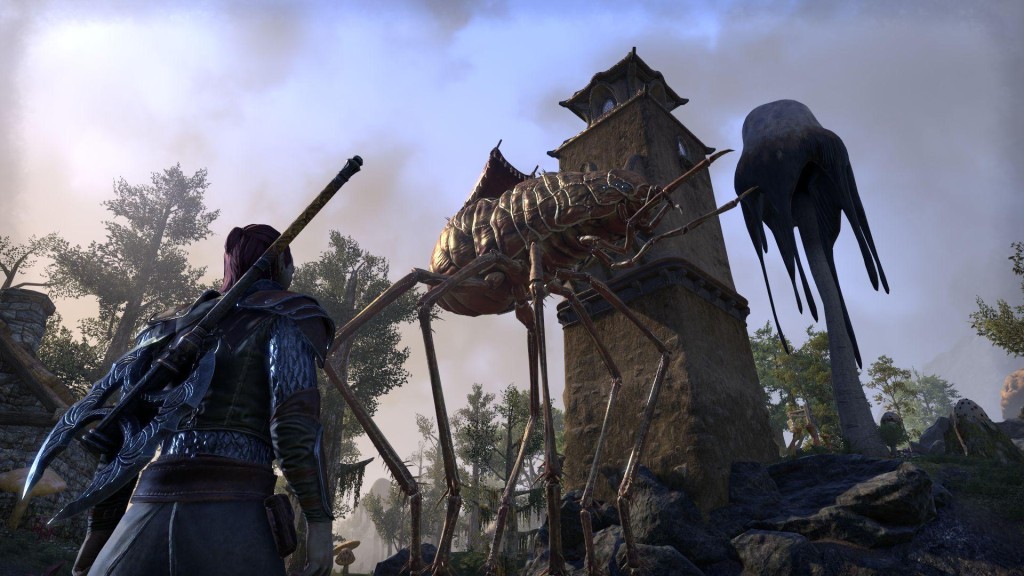 Defining The Elder Scrolls Online: Morrowind a simple expansion would not make justice to the work done by Bethesda. ESO: Morrowind adds a story of over 30 hours to the many content already available, aimed at the avid players of the famous MMORPG with a special eye for new players. And it is in the hands of new players that we have fallen into this adventure, experiencing what it means to go from level 1 to Vvardenfell Island without ever approaching ESO.

The neophyte player is welcomed by the classics of choice of class and the creation of the other virtual ego. In this regard, we can tell you from now on that the integrated editor has nothing to envy to that for example present in Skyrim. You can adjust height, size of every single element of the body, including various face measures, and many other details. In our case, to fully experience the innovations introduced in this expansion, we have fallen as Warden, the new class in some respects to the druids of Dungeons & Dragons or World of Warcraft. The Warden is the perfect class not only for those who are approaching ESO for the first time, but also for those who plan to face this adventure alone, without being influenced by other players.

Yes, because Bethesda, in addition to making an unpublished adventure suitable for newcomers, has also focused particularly on making gaming dynamics accessible to the most solitary. Right from the very first levels of play, the Warden has the ability to summon a Feral Guardian, a precision warrior bear, able to fight you side by making us feel less the weight of loneliness. The world of ESO is still very rich in life: in the early Morrowind areas you will find a lot of players involved in the same missions you can work with or just ignore.

And the new player integration system does not end here. ESO veteran users will arrive at Morrowind at a more advanced level, finding challenges that are appropriate to their degree, but you can still reach 50th level characters and have a perfectly balanced experience for both of them. At this point you will be wondering: and once the new adventure in the Morrowind province is over, what happens? History will guide you to the previous MMORPG content, allowing you to deal with tens and dozens of hours of content.

ESO has evolved so long that it would be a real madness to explain everything by wire and by sign. Over the years the monthly subscription has fallen, which means that you can buy the game plus Morrowind expansion without having to invest more money. There are also 4 DLCs and a dungeon pack, plus PvP sessions (there are also the brand new Battleground 4 vs. 4 vs. 4), objects to be unlocked, the so-called The Craglorn Zone specially designed for veteran players, hundreds of Quest, let alone the crafting system!

If what you’re asking about is naked and raw gameplay, you know that ESO, and consequently Morrowind, has inherited a lot from the games of the Elder Scrolls saga, as well as it was legitimate to expect. Those who want to step back into the Morrowind province can do so with very similar gaming dynamics. You can take the first-person view (what we might prefer) and fight using mechanics really similar to those seen for example in Skyrim.

Fights are therefore much more dynamic than those seen in other MMORPGs, as our character has to hit with mouse-specific controls, start from opposing strikes, roll over as needed to avoid blows and use special abilities that will be placed in a ‘ Fast bar, which can also be used with specific keyboard buttons. And to answer another question you may be wondering: yes, we’ve tested everything on Windows PCs, but Elder Scrolls Online’s expansion is still available for both PS4 and Xbox One. Just like in Skyrim then using specific weapons or pieces of armor will increase your ability and efficiency in using that particular class of equipment. Each time you step up, you can increase one point one of the three basic features, stamina, life and magicka, plus skill points to spend for example in magic or skill-specific weapons and armor. In short, a real role-playing game immersed in an incredibly vast online world.

Review The Elder Scrolls Online: Morrowind – Final Judgment – We Must Admit That The Elder Scrolls Online: Morrowind manages to exercise its charm, and even if you are not too likely to play online it might surprise you more than a surprise. Bethesda has placed an almost manic care to make it accessible to anyone, even so called lonely wolves, in fact further renewing a product that over the years has been able to evolve adapting to the tastes of its users.

There is also to be said that the technical sector is partially swinging. Certain glimpses of the Morrowind and surrounding area, as well as some in general on the continent of Tamriel, are really amazing, but there is little to go around: this is a graphic sector that has a few years behind it. There is also to be said that thanks to this graphic segment, the game runs smooth on all platforms, of course a little better on PC, and even with not too recent hardware it is possible to play all in high definition and even more Of 60 fps.

The company Bethesda announced that the next addition to the role-playing online game The Elder Scrolls Online will be called Horns of the Reach.

With the new addition, two new dungeons will come into play. The first of these is the Bloodroot Forge, an ancient, long forgotten smithy recently discovered by the Reachmen and their minotaur allies. This smithy, created by the Daedric prince Hircine, is rumored to be able to create weapons of incredible power. The second dungeon Falkreath Hold will send players to the besieged township. New dungeons will be available in the normal and veteran mode, they are waiting for you to meet with old and new enemies.

Together with the paid DLC, a free 15th update will be installed, which will bring a new Battlegrounds, Arcane University. This map is located in the Imperial City, it has many high platforms and sophisticated teleports. There will also be a new mode for fights, Chaosball. In it you need to keep the ball as long as possible, but the longer the ball is in one team, the lower its defense, the weaker the healing and the higher the damage caused by the ball. Access to the new Battlegrounds and the new regime will be granted only to the owners of the Morrowind add-on.

Addition Horns of the Reach will be released in August and will be free for all ESO Plus subscribers. More news about ESO focus on our site.

In order to consolidate the feedback a little better, the develop team ask testors for the three things that things they really didn’t like or felt were out of place. Here are what they hate and some suggestions.

Trash System – Remove the breakage/trash system. Space is mostly at a premium and death is too harsh in that regard.

Crafting – Crafting book so we can see recipes without having to be at the crafting station. When Crafting, if you have enough mats in inventory, give us a selectable slider to craft multiples of same item, like resource refinement. Also same for building and repairing buildings, one click and use all mats in inventory, instead of one click per 5 resources used.

Map System – Change the Map system, it needs to be more accurate and contain more info, since the game depends on travelling. Be able to adjust mini-map from entire area to/and or immediate area. Include dots on map for mobs and enemies (already have dots for guild mates). In addition to the whole world map, a detailed map of each zone that players can open up is needed. “I would like to put markers on that map. I would like to be able to see my guildmates on that map. I could never quite tell where my guildmates were this round because the distance their dots were showing up was so small, the mini map is so small, and the buildings I had placed were covering their dots when those dots did show up.”

Movement – Mounts are needed, a great deal of time is spent traversing the land back and forth from house to Gatetown, to craft. So much time spent running from here to there and back again. So much time. Either Mounts, Teleportors between npc cities like Gatetown and King’s Market.

Real Estate – Need more space for buildings/tents/houses. Some people are building multiple tents because there isn’t enough space to go around. If there’s going to be limited plots in safe zones for housing, these should only be available to solo players.

Guild – Let guilds control whole zones, fill the zones with more personal plots that a guild can rent out to the public or keep for guild use with guild protection on storage in guild claims. Once a guild gets a territory, members should only build housing there. The base plots should be redesigned allowing more buildings. Maybe make the whole area available for building. We can mine and chop trees down, why not terraform the land in base, to make housing spots available. There could be plots for sale in PvP zones, to help alleviate this problem.

Combat – When you get hit enter combat as well, shorten ‘in combat’ timer or create a hotkey to switch between “fighting” mode and “gathering” mode. Automatically swapping to the correct tool for harvesting while holding your weapons would be a very nice change. Remove or reduce cooldowns in PvE/non combat.

Auction Houses In PvP Areas – Availability to build Auction Houses (preferably a lot smaller than the one in King’s Market) in PvP guild plots – I think if this was implemented, a lot of PvE players would want to sell their excess armors and weapons that they make while unlocking higher tier armory and weaponry. This would let the PvP players buy their armors/weapons and go out to battle quicker. Having the auction house so far away from PvP areas will also have a negative influence on PvE players, as the demand would be lower and supply would be higher due to the fact that nobody would want to travel 4-5 or even more cluster to get there and then back.